It started with T-shirts.
Saddened by the recurring reports of police violence against black people and inspired by the #BlackLivesMatter movement, Paulah Wheeler 16MPH designed shirts emblazoned with the words “Black Health Matters.”

She had them printed for herself and the other board members of the Association of Black Public Health Students (ABPHS) with the intent of sparking a conversation on campus about racism-fueled health disparities. They did.

“People would come up to us and ask where they could get the T-shirt,” says Wheeler. “They wanted to know if we were an organization, and if so, how they could join. The shirts touched a nerve.”

Wheeler had met her fellow T-shirt wearers—Mercilla Ryan-Harris 16MPH, Khadijah Ameen 16MPH, and Matthew McCurdy 16MPH—within her first few weeks at Emory’s Rollins School of Public Health. All four joined ABPHS; Ameen as president, McCurdy as vice president, Wheeler as treasurer, and Ryan-Harris as an active member. The three women were in the health policy and management department, so they shared many classes. The foursome quickly bonded over a shared passion for improving health outcomes for black people and even joked about forming a consulting company. The response to their Black Health Matters T-shirts made them think such a venture was perhaps not a joke.
________________________________________

Paulah Wheeler 16MPH designed the T-shirts that eventually led to the formation of BLKHLTH.

________________________________________
One weekend, the four friends holed up in the Decatur apartment shared by Wheeler and Ameen. Living off of Uber Eats and pots of coffee, they filled flip charts and notebooks with org charts, timelines, and topics. They brainstormed late into the night until Ryan-Harris collapsed on a couch and McCurdy on the floor. The next day they were back at it. In the rush of capturing ideas on paper, Black Health Matters was shortened to BLKHLTH. In the end, they decided they liked the vowel-free moniker.

At the end of the weekend, BLKHLTH was born. “By the time we left that apartment, we had hammered out our mission and vision, formulated our goals, and created a framework of a strategic plan,” says McCurdy. “We figured it out. We created a business.”

Today BLKHLTH is an organization dedicated to improving the health and wellness of the black community. It posts articles, blogs, and podcasts on its website, BLKHLTH.com. It consults and collaborates with other local organizations that engage with the black community. It puts on community health education events. And it conducts workshops to train the current and future health workforce on the role of racism in perpetuating health disparities.

This agenda is even more impressive when you consider that Wheeler, Ryan-Harris, Ameen, and McCurdy are doing this in their spare time. All have demanding full-time jobs. Wheeler is an Oak Ridge Institute for Science and Education Fellow in the CDC’s Center for Global Health. Ameen is a public health adviser in the CDC’s Office of the Associate Director for Policy and Strategy. McCurdy is a social science analyst on the strategic planning team for the Department of Health and Human Services. And Ryan-Harris is the program manager for the Public Health Sciences Institute at Morehouse College.

So when do they do all the work necessary to run BLKHLTH? “Pretty much every minute we are not at work,” says Ameen. “We can do that because we all love it. And we believe we are filling a need.” 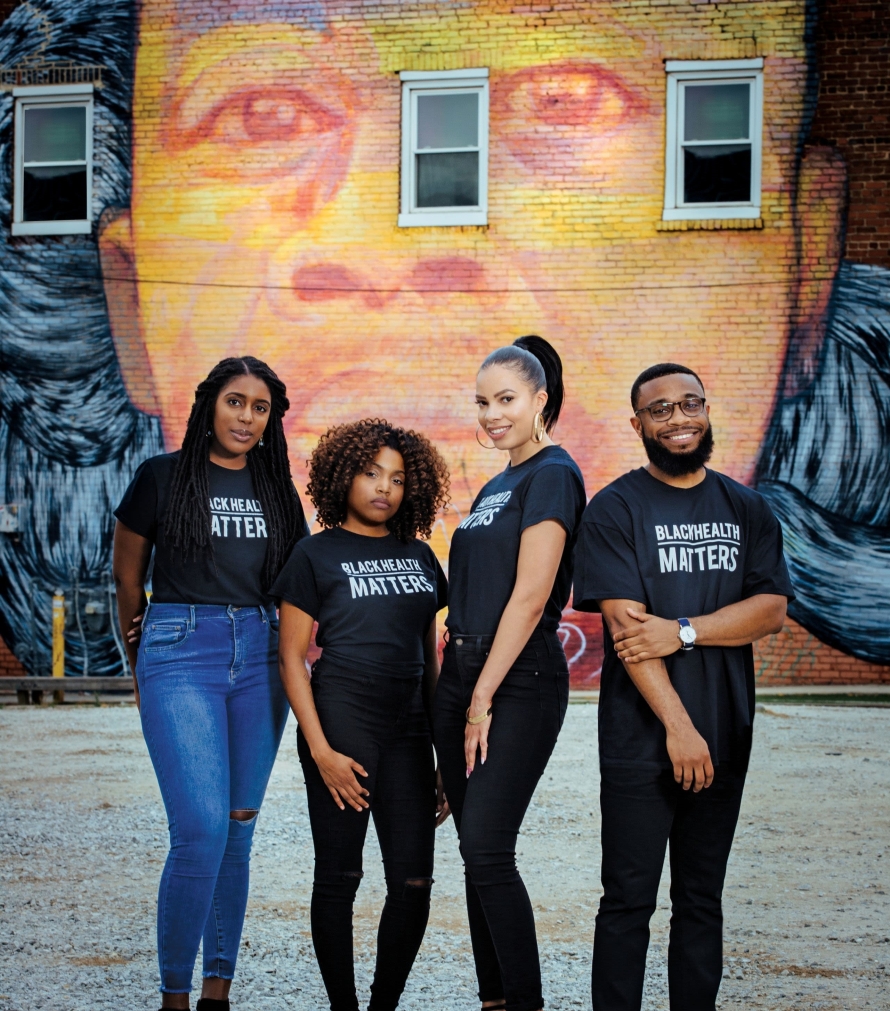 Paulah Wheeler, Khadijah Ameen, Mercilla Ryan-Harris, and Matthew McCurdy (l-r) pose in front of a mural, Sunrise of Edgewood, located at U Space Gallery at 439 Edgewood Avenue SE, which was created by Baltimore-based street artists Gaia during the Living Walls Conference in 2012.

The views/activities shared in this article belong to BLKHLTH and are not representative of official positions of the their employers. 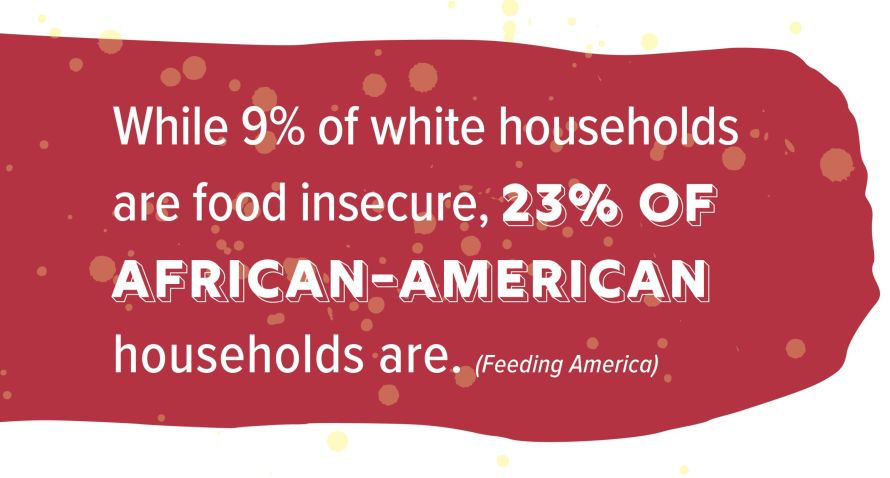 Community events account for a large part of BLKHLTH’s work. Its two main event series—BLKHLTH Ask a Doctor and BLKHLTH Conversations—are designed to break down barriers that black people experience in accessing health-promoting information and services.

The structuring of the events is intentional. They are held within predominantly black communities, ideally at a black-owned business. To attract participants, flyers are posted in churches, grocery stores, pharmacies, and libraries in the neighborhood. The physicians or experts who are invited are most often black, contributing to an environment of trust and cultural understanding.

There are no rigid presentations or panel discussions during the 2.5 hour session. Participants are presented with introductory information about the topic, then they break into small groups for facilitated discussions. Finally, an open forum is held where everyone sits in a circle while the physicians, who insist on being addressed by their first names, respond to questions and provide more detailed information about the health condition.

These sessions address two hurdles in the black community—health literacy and mistrust of the medical community. “If you have low health literacy, you may not understand the instructions your doctor gives you,” says Ryan-Harris. “We want to provide information in a way that is easily digestible and in a setting where people feel safe to ask questions.”

The trust issue is harder to tackle. In the Tuskegee syphilis study, U.S. Public Health Service researchers withheld treatment from about 400 black men, without their knowledge or consent, to study how the disease progressed. The study ran from 1932 to 1972, well after penicillin became the standard of care for syphilis. Though this study is perhaps the most well-known example of medical racism, it is just one in a century-long pattern.

This mistrust not only keeps black people from going to the doctor, it keeps them from giving blood, donating organs, and participating in clinical trials. “Researchers need to know how black people live and cope with and manage disease,” says Wheeler. “Then, as new information and treatments become available, they can make them applicable in a context that works for us.”

The BLKHLTH Conversations sessions are designed as a brainstorming venue, tackling broad health issues affecting the black community. These sessions have covered entrepreneurship and mental health, intimate partner violence, and HIV, and are structured to give everyone a voice.

Subject matter experts and lay attendees are asked, for example, “If you had unlimited resources and no barriers, what would you do to solve intimate partner violence in the black community?” Participants write an answer on a card and then switch cards. They then rate the idea on the card they were passed on a scale of one to five. The rounds are repeated four more times, and then participants are asked if anyone has a card with a score of 25—a perfect score. The group then discusses the top ideas.

“Some big, great ideas came out of this session,” says Wheeler. “And that’s because everybody got a chance, anonymously, to suggest their brainchild. There may be people in an organization who have really great ideas but who, in a conventional structure, do not get a seat at the table. We feel the answers are within our community, and we want to give people the opportunity to share them.”

The BLKHLTH founders plan to write papers on the solutions generated in these sessions as a way to broadcast them to a broader community.
Khadijah Ameen and Mercilla Ryan-Harris discuss attenddees’ ideas about the causes of black maternal health disparities at an Ask a Doctor event in July.

Through the course of launching and growing BLKHLTH, the four leaders learned about the link between racism and racialized health disparities in the black community. “That is something we had to teach ourselves,” says Ryan-Harris. “There is a huge body of literature out there about this, but we never covered it in school. In class when we were talking about health disparities, we always talked about social determinants. But we never really addressed racism as the underlying cause.”

The more they learned, the more they realized they wanted to share that knowledge. They developed various workshops around the issue, including those appropriate for undergraduates, graduate students, and practitioners.

The workshops are centered around Critical Race Theory, a concept developed by legal activists and scholars that examines and challenges the relationship between race, racism, and power. The BLKHLTH founders join a growing cadre of professionals applying the theory in the public health field. “It’s a step beyond cultural competency,” says McCurdy. “It’s not about creating a program that doesn’t offend. It’s about creating a program or acting in a way that is reformative.”

This includes recognizing and unlearning implicit bias. For example, studies have long shown black people are undertreated for pain compared with white people. A 2016 University of Virginia study of medical students and residents found bias plays a role in the discrepancy. Half of the white study participants held one or more false beliefs about biological differences between black people and white people—black people’s skin is thicker, black people’s blood coagulates more quickly, black people’s nerves are less sensitive. And those who held those beliefs perceived black patients’ level of pain as lower than that of white people.

“If you are a well-meaning person, but you genuinely believe that your black patients don’t experience as much pain as your white patients, you’re not going to provide the same treatment,” says Ameen. “We will continue to see these racialized health disparities until this is unlearned, and that’s what we are trying to teach in our classes.”
________________________________________

Traditionally black neighborhoods often lack access to fresh, healthy foods.
________________________________________
For researchers or practitioners, Critical Race Theory calls for amplifying the voices and experiences of black people and other marginalized groups. Listen to the black people they are studying or serving. Include them on the leadership team, the design team, and the team that goes out and does the field work. Make sure the work being done actually benefits this group.

So far, Wheeler, Ryan-Harris, Ameen, and McCurdy have taught versions of the class at Rollins, University of Georgia, and the CDC. They plan to expand and formalize the curriculum and hope to distribute it much more widely. “I would like to develop two-day workshops for MPH faculty, staff, and students to give them the tools to think critically about how race and racism intersect with their work,” says McCurdy.
They also want to grow BLKHLTH beyond Atlanta, taking their events and classes national and maybe even global. And they want BLKHLTH to become their full-time jobs. “We have strategic planning meetings twice a year,” says Ryan-Harris. “At our last meeting, we all agreed we wanted to be doing this full time within the next three to five years. So we’ve started planning how we are going to get there.”